Middle of November saw me out in the middle of the New Forest with Love Love Films taking stills of them making a music video for Andy Duerden. Roll call was at 7am so it was all hands to the decks for bacon sandwiches at 6am!

It was the 2nd day of shooting, the weather better than the day before where the crew had to deal with foggy conditions. I had no real idea of what to expect other than there were going to be some guys dressed in green and orange stomping about in the New Forest.

All fueled up with Bacon goodness, we convoyed it into the deapest depths of the New Forest to shoot. 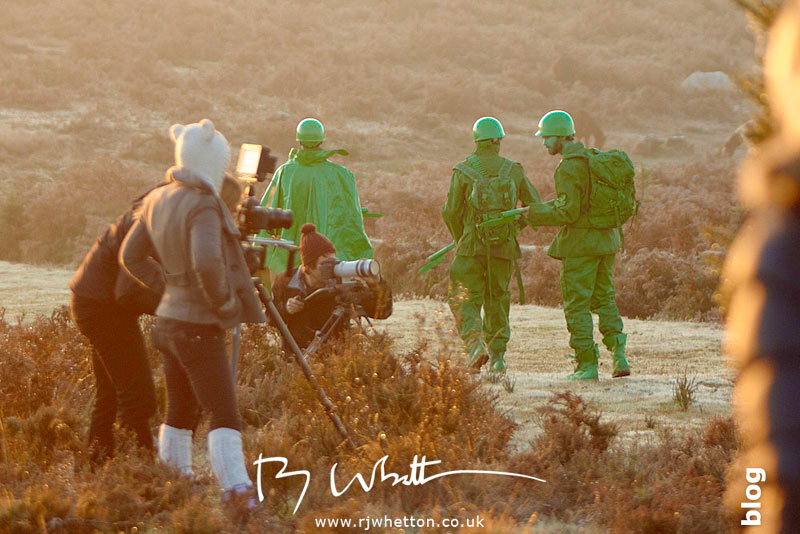 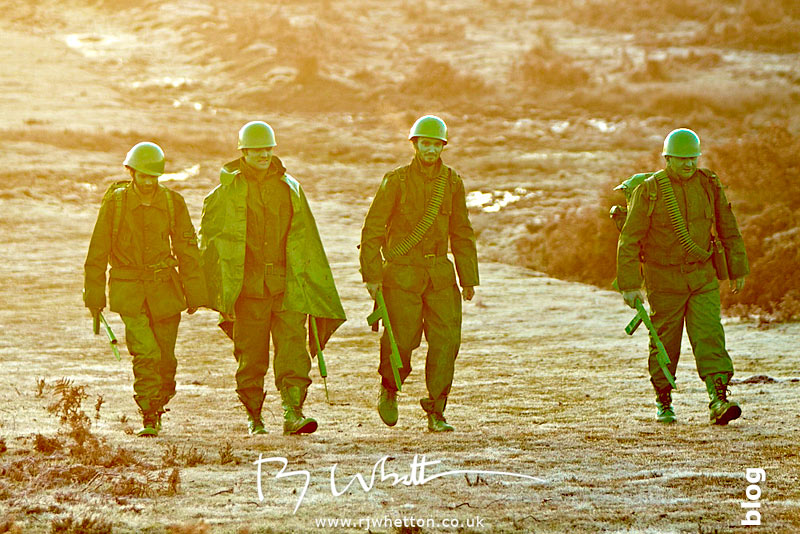 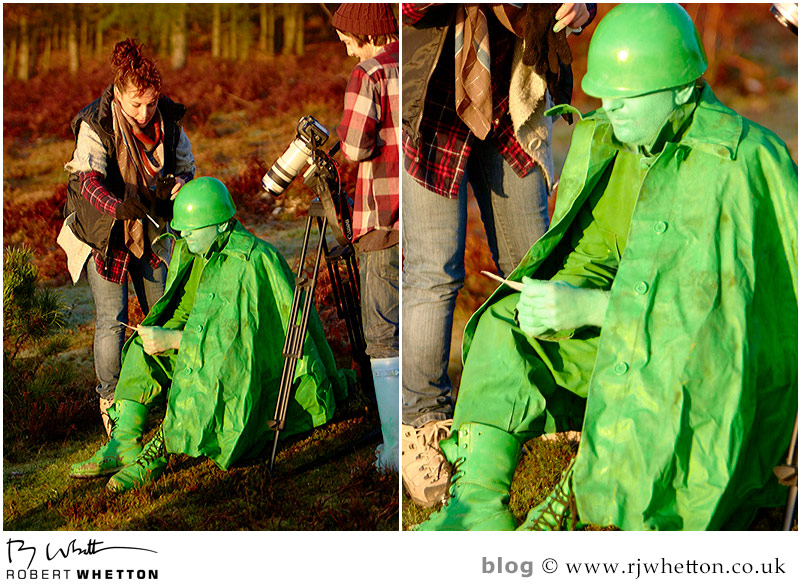 While Andy was having some filming done, I got a setup shot of the other green army men. 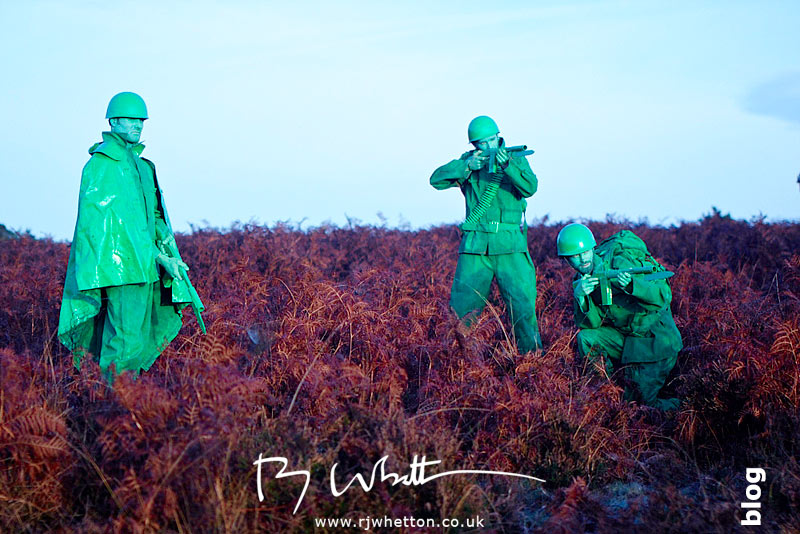 Next the guys whisked Andy off to a location from the previous days shoot to capture some loan footage. I tagged a long to get some shots. 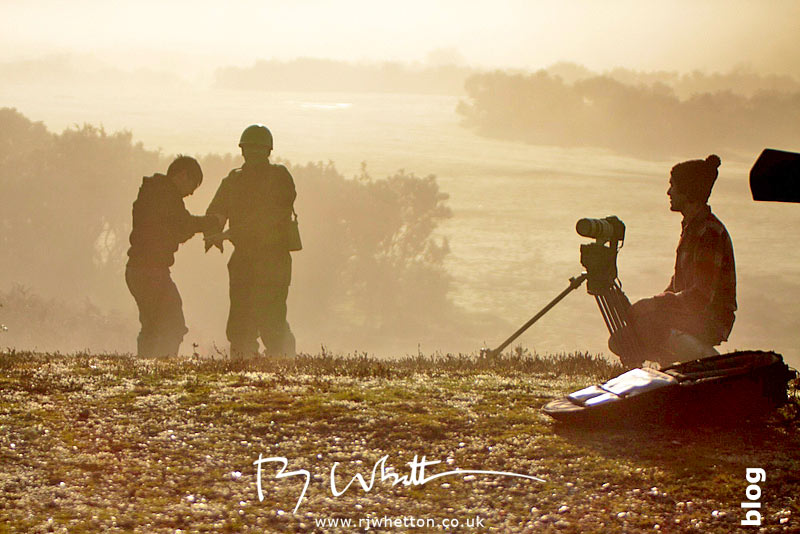 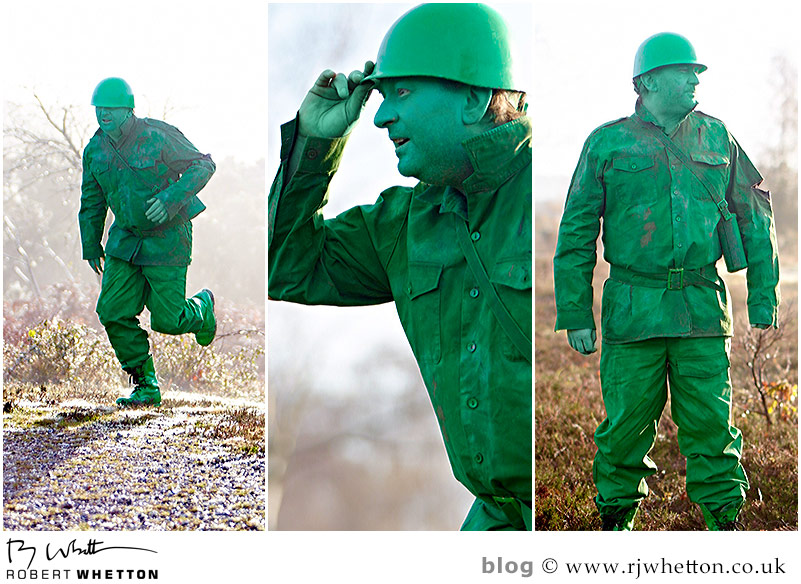 After completing Andy’s footage, we high tailed it back to the main location for more group footage. 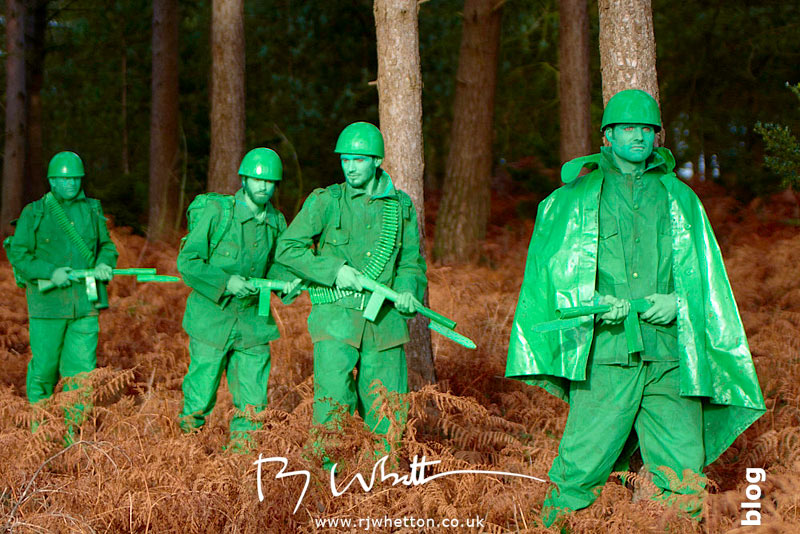 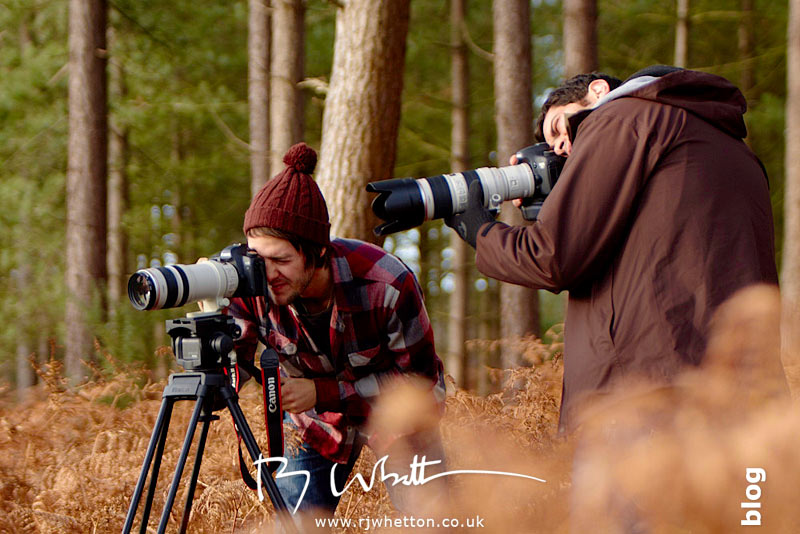 The orange army guys were having their finishing touches added in makeup ready for their filming. 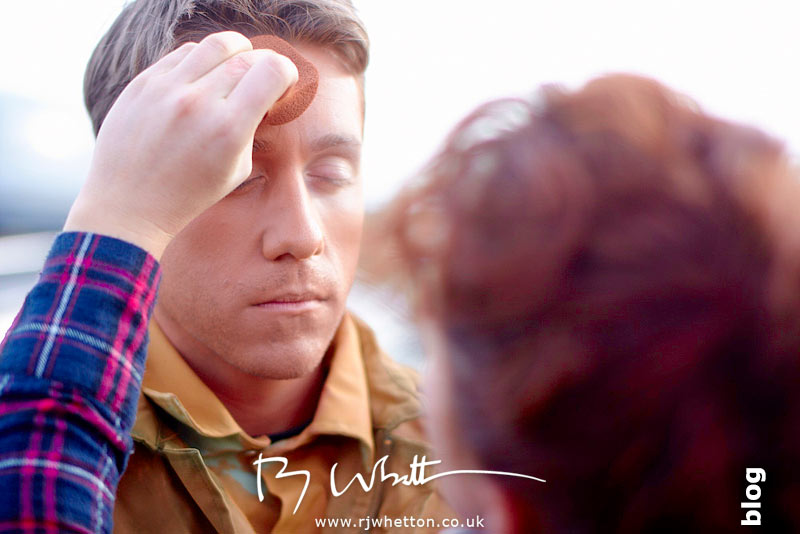 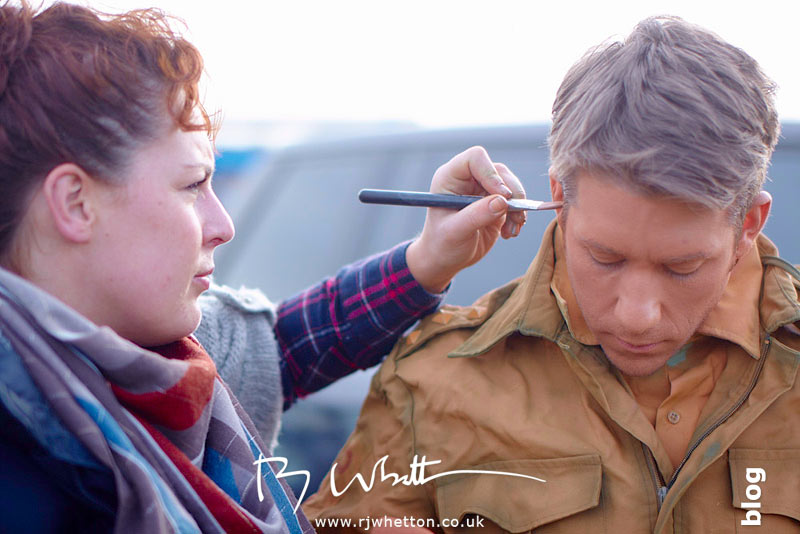 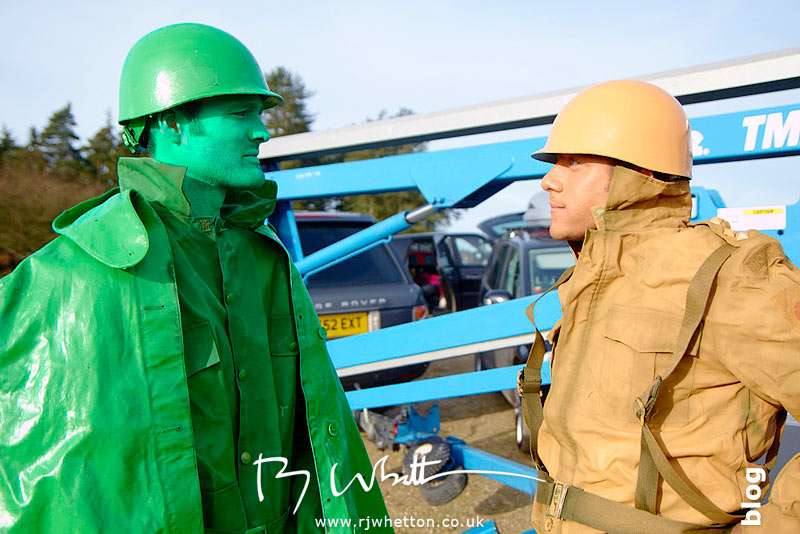 Green vs Orange, peace held for the time being. 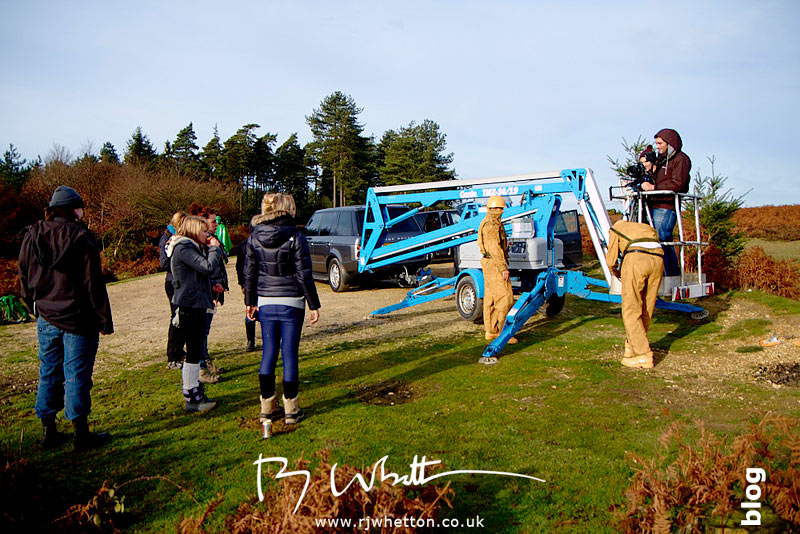 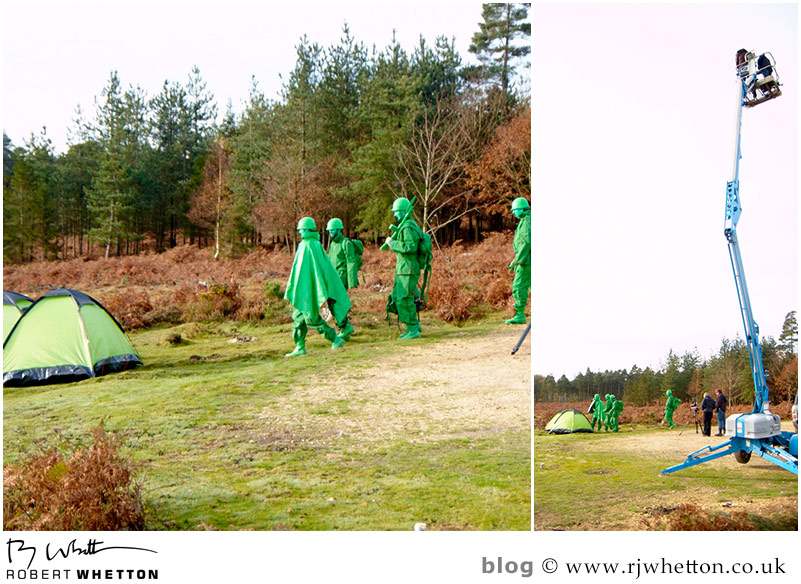 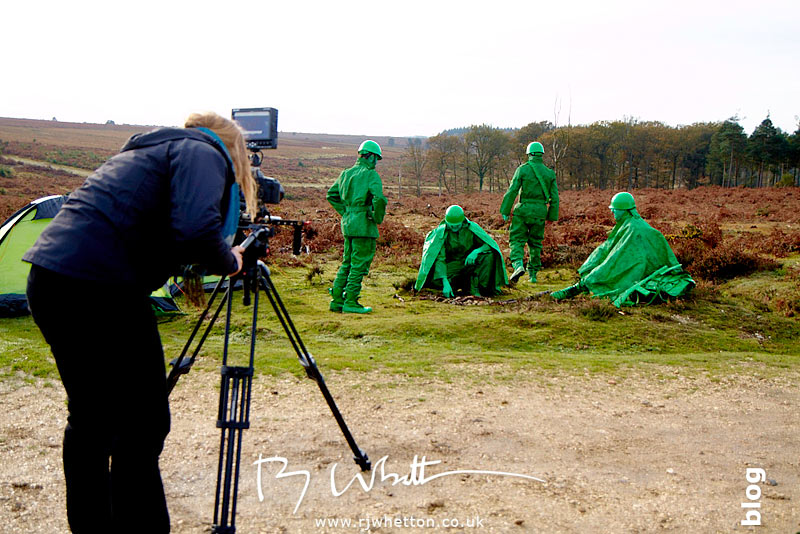 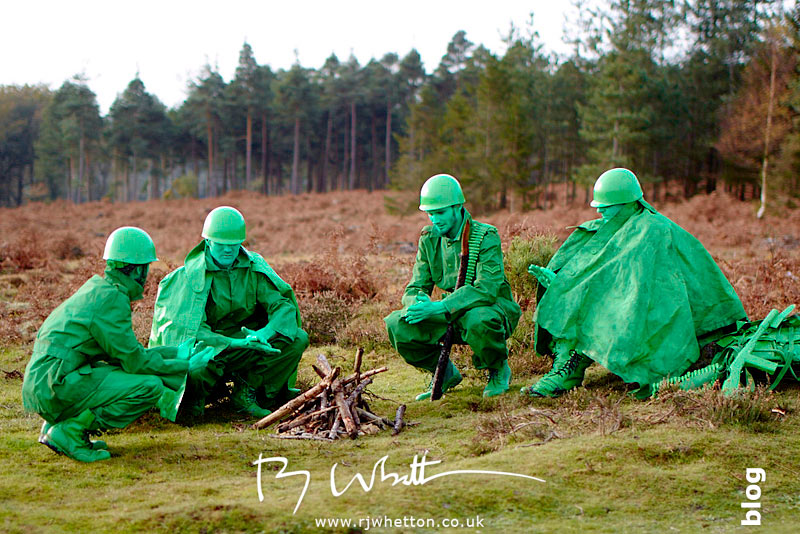 The guys were wishing that they had a “real” fire at this point, was a very cold day.. 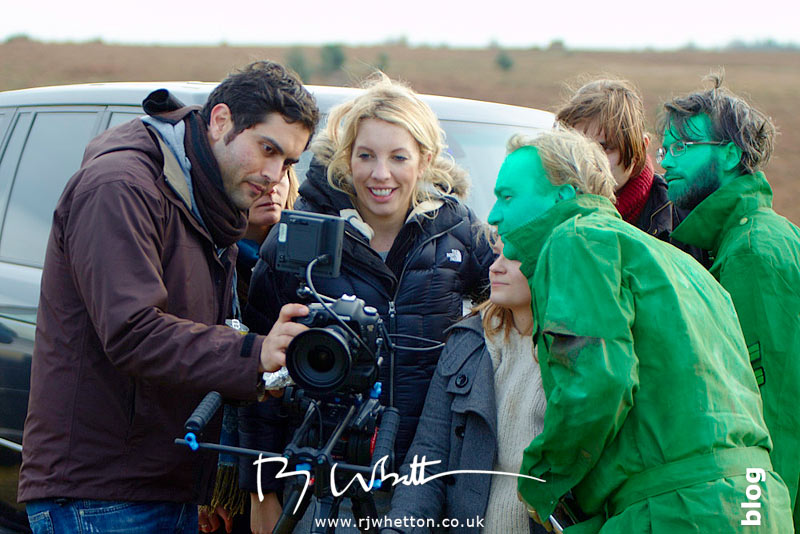 Once back on the ground everyone was excited to review the footage from the crain cam! 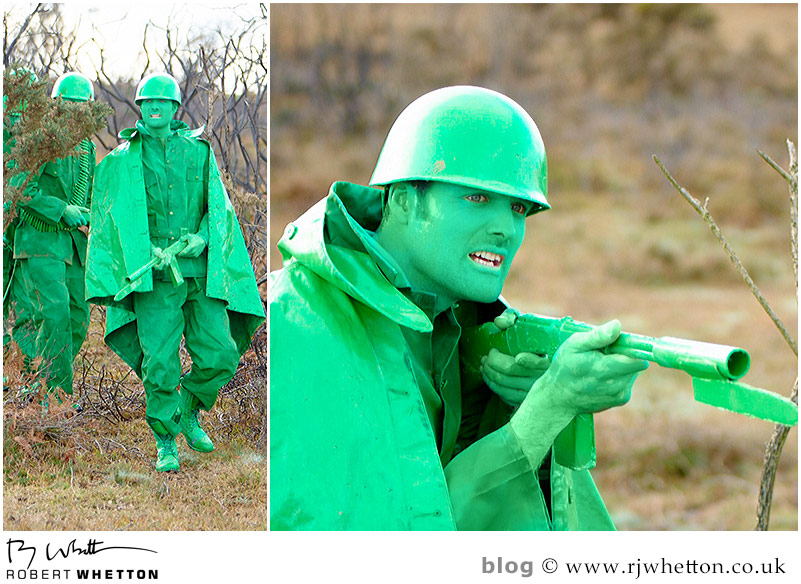 Everyone packed up and it was onto the final location for the day – the final battle – Green vs Orange! who would win? 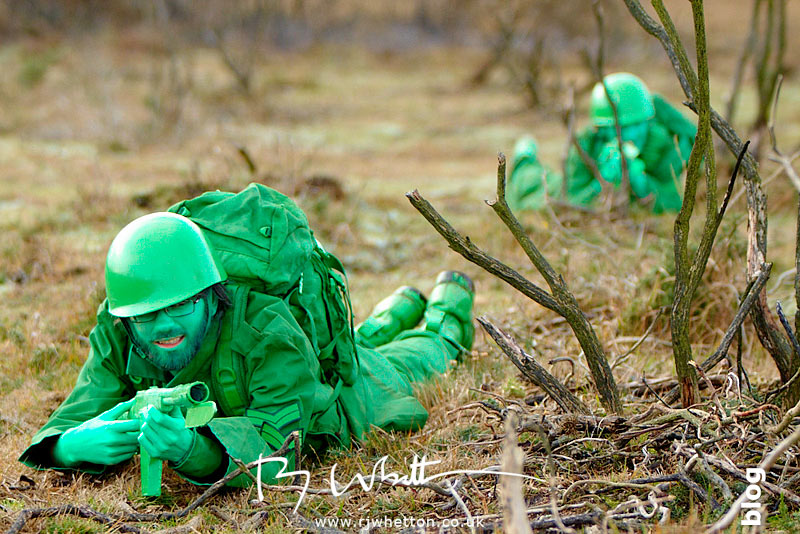 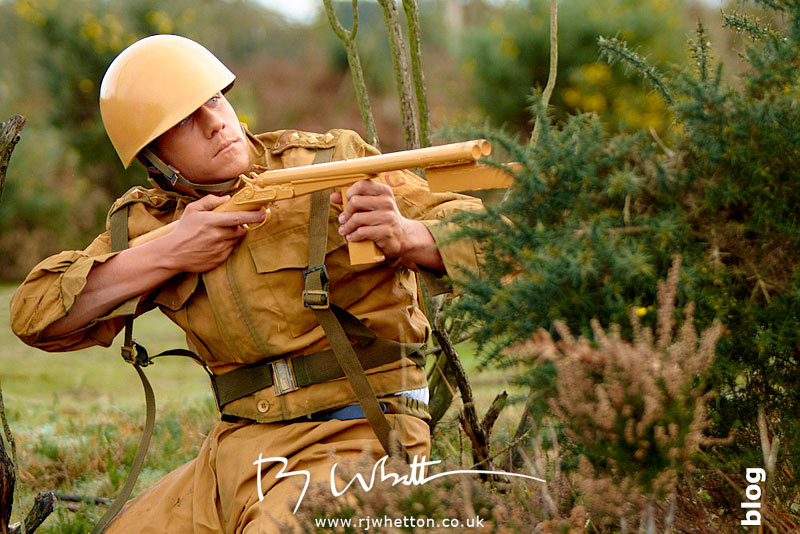 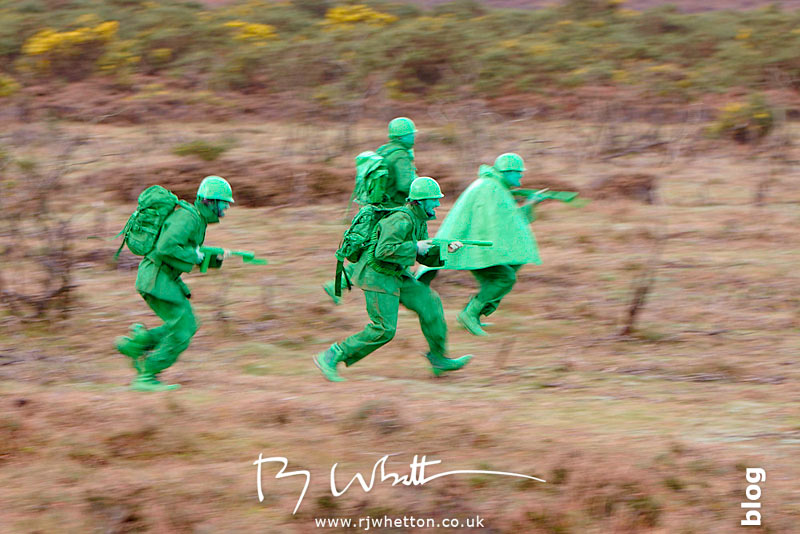 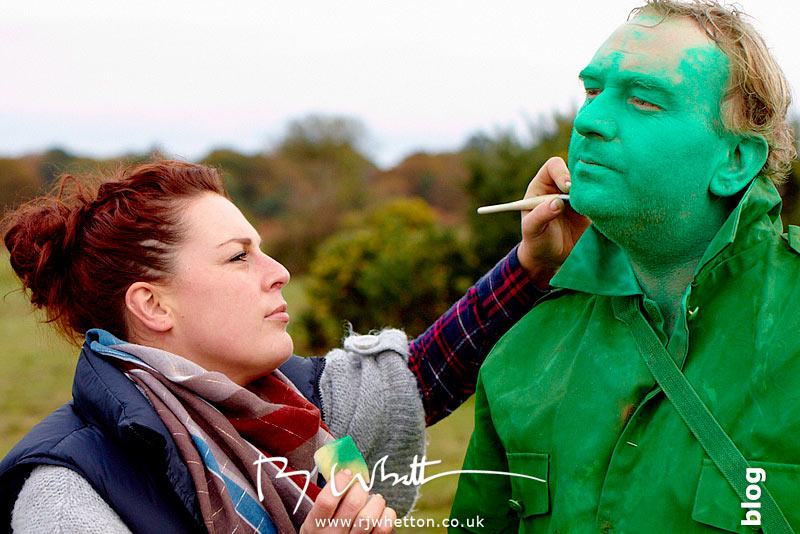 Rosie Lee adds more make-up to Andy, keeping everyone green and orange was a full time job all day!

Ross goes though a fight scene with 2 of the actors. 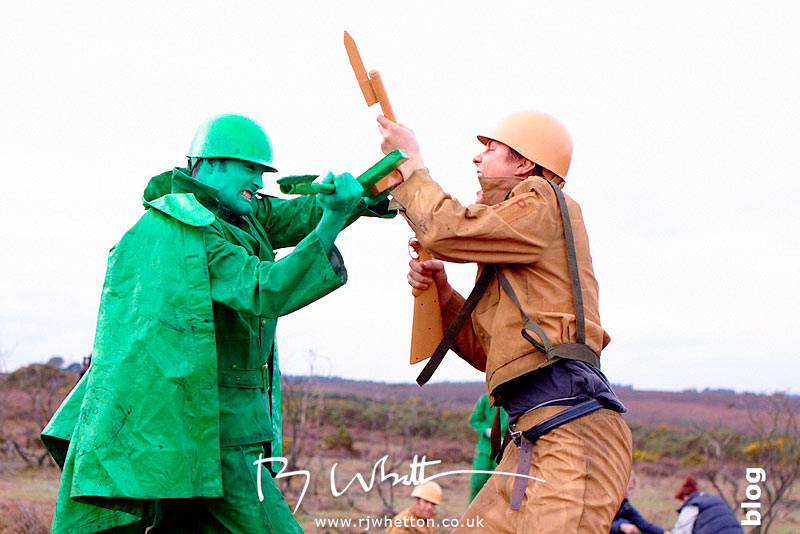 Once Ross had been though the choreography, the two actors practiced angry faces while fighting. 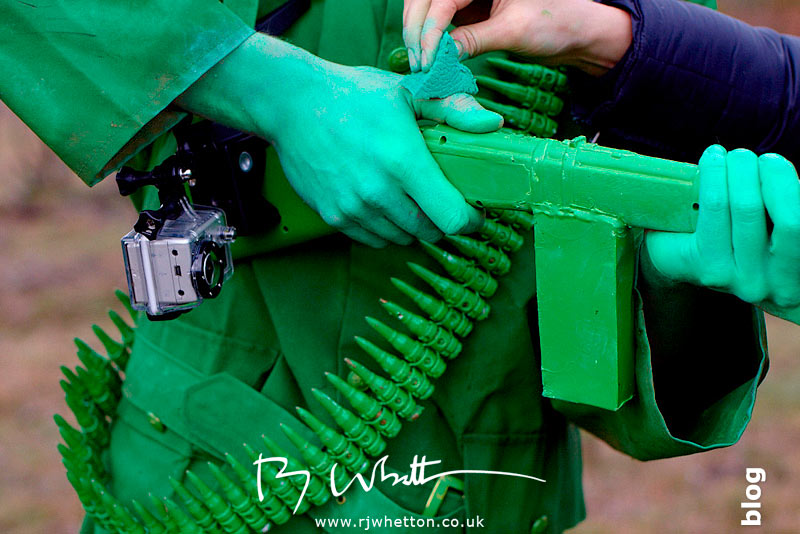 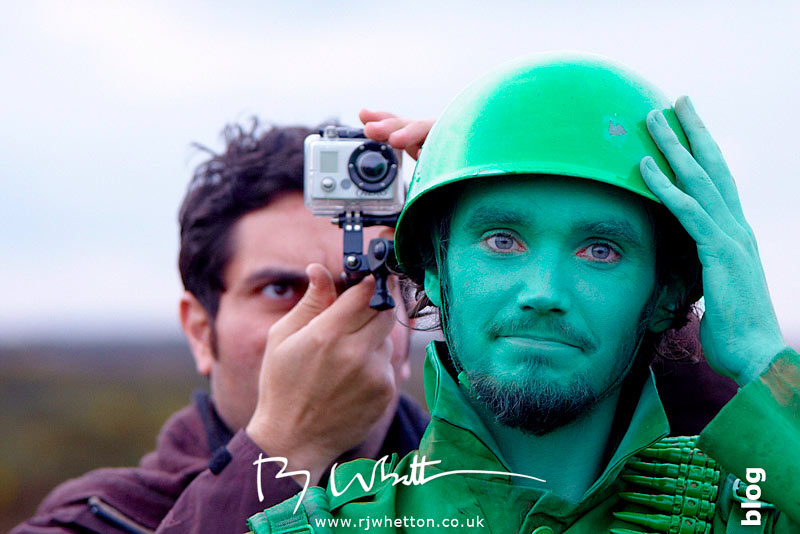 Some GoPro action for a some different angles! 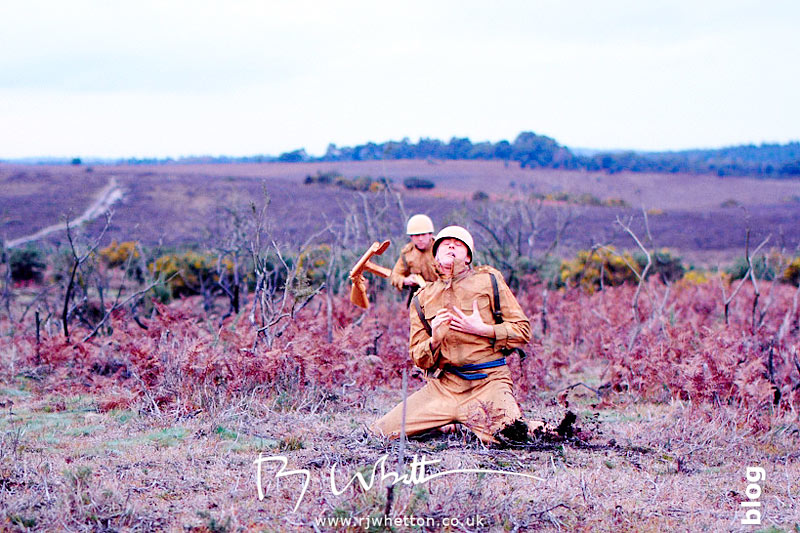 Last footage for the day, the death scenes.. 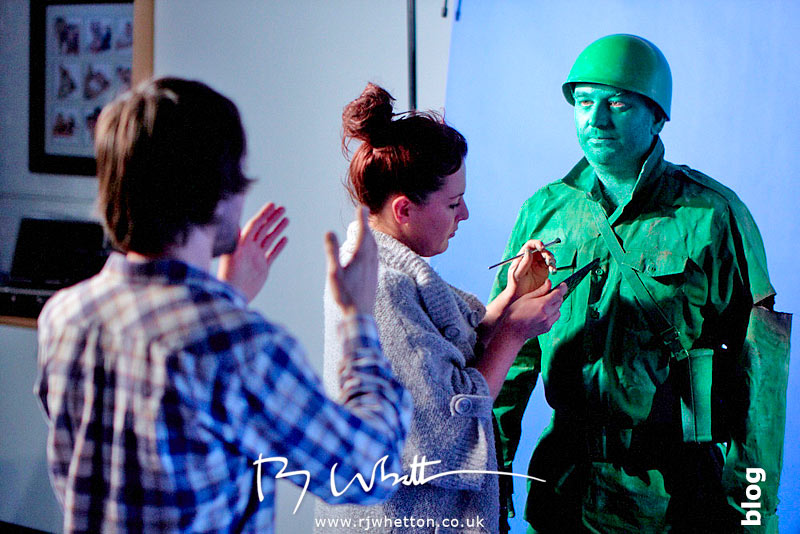 Final day of filming, into the studio for blue screen. A miniture house had been made and filmed, all it needed was the final angles to composite them together in post.
Rosie puts finishing touches to Andy’s make-up while Ross explains what is needed. 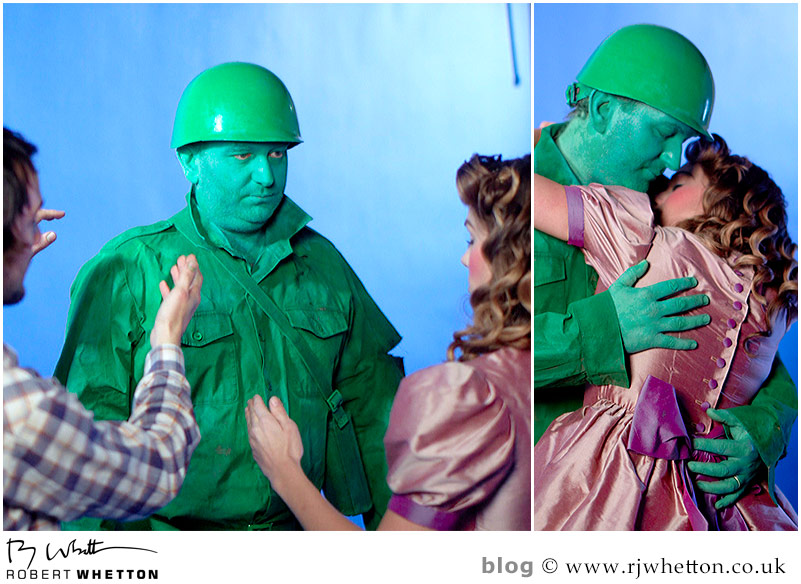 Andy has come home from the war to his wife who has been waiting for his return.
Ross eplains what is needed in the embrace.

It was a fun packed 2 days for me. My first time covering a production, I enjoyed every minute of it! A huge thanks to Georgina at Love Love Films for giving me the oportunity to cover the filming of the Music Video!
The finished music video can be viewed over on YouTube. Top Heavy Down by Andy Duerden